THINGS have been… well, hectic is the first word that comes to mind. I’ve been working ten-hour days and seven-day weeks on the day-job project for a few months. Hence: no blog posts, little Twitter activity, and so on. Most days after finishing work I’ve been too tired to do anything more than watch TV until I fall asleep.

At last, that’s coming to a close. Today is the first Saturday I haven’t had to work in quite a while (well, almost; I did about an hour first thing to tidy up a couple of little jobs). And so, time for a blog post. Whee!

So first, let me get the obligatory Trump rant out of the way. Yes, I’m worried. I’m concerned for the twenty million or more people who could lose medical insurance cover (including the people who voted for Trump thinking he didn’t really mean what he said about repealing the ACA… you silly people, you), and I worry about what the impact of a bigoted administration on minorities is likely to be, and I’m scared half to death about the long-term damage a cabinet-load of shit-for-brains climate change deniers will be, and I’m really worried about what a thin-skinned “president” with the maturity of a twelve-year old and access to the nuclear arsenal could do if someone slights him and sets him stomping his little feet.

Whatever happens, the country (and the rest of the world) is in for a rough ride, but there are a few glimmers of hope: there’s still the chance that the Electoral College will do their duty come December 19 and reject Trump the Chump; if they don’t, there’s the possibility that he’ll do something incredibly stupid and illegal that’ll get him impeached (I can kinda see that happening before this time next year, to be honest); meanwhile there are plenty of sensible people on both sides of the aisle who’ll oppose him and his Bizarro-world cabinet of defectives, hopefully enough to be able to stop some of the worst from coming to pass; and then there are the activists like the ACLU and others who’ll be doing their level best, too. Maybe I’m being overly optimistic, but the alternative is ulcers, and having had one of those I’m trying to stay hopeful.

Now to other things. As I said, I’m back to something like normal on the work front, and that means more time for other things INCLUDING GETTING BACK TO WRITING, YAY! The Artemis Device has been sitting there since, what, April? waiting for me to edit it so that it can be published. I actually did some work on it today. After so long away from it, I’m rusty; I still haven’t finished chapter 1, even. But I’ll do some more tomorrow and I plan on setting some time aside on work days, too, to get more done. The more I do, the more momentum I’ll get built up and the easier it’ll get. I’ll be glad when it’s all finished, because I have two other writing projects I want to work on but I’m not allowing myself to get sidetracked until this editing is done, done, done. But boy, today was kinda rough.

Reading: I’m about 80% through Abaddon’s Gate (book three of The Expanse). Damn, these books are good.

TV: I admit it, I can be a terrible binge-watcher at times. I’m finally watching the last couple of seasons of The X-Files (for the first time ever). I watched both seasons of Carnivàle (don’t you hate it when a damned good show gets cancelled because, hey, good TV don’t mean nothin’ if the advertisers aren’t making their pile). I’ve been watching Fringe again, and I’m part way into season 4. Things on my list that I haven’t got to yet: Westworld and Twelve Monkeys.

Enough blog post for now. I call beer o’clock, and time for dinner. Meanwhile, here’s Vixey the cat to keep you company: 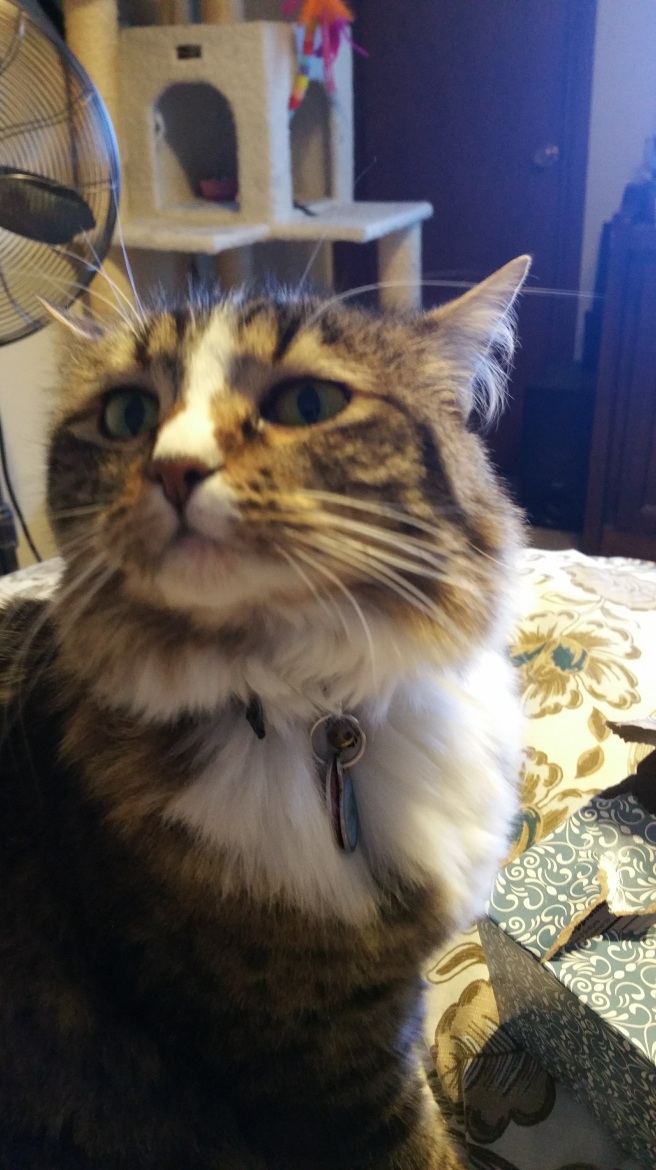 Until next time, gentle reader…