FINALLY, after too many months of delays and problems and other work-hurdles, I just finished a major editing pass of The Artemis Device. Let loose with Woot! and Woohoo! and other celebratory sounds! Do the I’m-done-for-now Happy Dance! 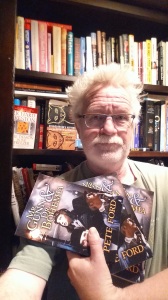 In celebration, I’m giving away something for free. I have three, count’em, THREE first-edition paperback copies of Mr. Gunn and Dr. Bohemia just waiting to be signed and sent out. Want one? All I’m asking for is a promise that you’ll put an honest review on Amazon when you’ve read it.

Go to my blog at petefordwriter.com and click the Contact link at the top. Fill in name and email address, and a short note to say you’d like one. DON’T put in a mailing address just yet. Since I only have three, the first three replies get the goods, and I’ll contact you via email to get a mailing address and ask how you’d like me to sign it. I’ll even pay postage, so to you it’s 100% free (apart from a little of your time to write a review when you’re done).

And don’t forget, it’s available in e-book form for Kindle, Nook, Kobo, etc., as well as print, from Amazon and others: CLICK HERE for details.

[UPDATE: Gary Webster in Seattle gets signed copy #2. One left!]

NEDERLAND, Colorado—which is about fifty miles from our home—has a yearly celebration based around a bizarre but true story involving a Norwegian guy, frozen solid and kept in a Tuff Shed right there in Nederland. I won’t go into the details but you can read all about it here.

We first heard about this whole thing a few years ago and we’d planned on being there sometime. Yesterday the subject came up and we wondered if maybe we’d missed it (again). And it turned out that it was happening, this weekend. It was a bit late to think about going up there yesterday, so we decided to leave it until today. Accordingly, this morning, early, we hit the road.

Being there on the Sunday we probably missed some of the real highlights, but there was still much fun to be had. Highlights…

We took off after that. We would have stayed longer, but I think we’d seen most of the Sunday events by that time and in any case we were both feeling the effects of the altitude, I think. (Nederland is at around 8,200ft elevation). A couple of short stops on the way home to get a picture of the iced-over reservoir and some guys climbing a huge rock, then home in time for tea. All in all a great day.

Well, I guess this makes it kind of official . . . I now have an author page on Amazon. Here it is: amazon.com/author/petefordwriter

It’s been a while since I posted, and since that last one—despite what I said about getting properly back to work on the Mr. Gunn & Dr. Bohemia sequel—I haven’t been able to find as much time as I’d hoped. Until today, that is. Today I was able to spend several hours tweaking the timeline and putting in some changes that I’d made notes about. I’m very pleased that I’ve been able to make some real progress at last.

(Now, a small confession: I’ve been watching Breaking Bad some of the time when I could, and should, have been working on the story. I can’t help it that the show is addictive. But we watched the last episode of the final season yesterday, so that won’t be happening again.)

There’s good news, though. The timeline is in fact mostly complete, in that all of the major story elements are in place. (And for some of this I give thanks to my editor, who scanned an early snapshot of the timeline when I got stalled, and asked some questions that highlighted places that needed work, and so helped me get moving again.)

Most of what I was doing today involved working out when each scene takes place and making sure that things fit, and making corrections when they didn’t (for example, I found one scene with two secondary characters going to the theatre when everyone else would have been eating breakfast). I’m a little bit short of halfway through that process, and I expect to get finished tomorrow. After that comes another pass of the story to make sure everything makes sense and that questions raised in early scenes get answered by the end. And I know that the ending scenes need some work—what’s there now seems rushed, with too much happening in just a couple of scenes. Those need to be broken up and spread out a little so that it doesn’t all come across as too abrupt.

So although progress is slow, the pace is picking up and I really think I’ll have a good draft of the timeline fairly soon. At that point I’ll share it with my editor, and then I can polish it until we agree it’s time to begin the actual writing.

Meanwhile, some small news about Mr. Gunn & Dr. Bohemia. I already mentioned that Old Firehouse Books in Fort Collins, CO was stocking print copies of the book on their shelves. To that I can now add that Tattered Cover Book Store in Denver has copies at all three of their locations. I’m planning on running by Old Firehouse, and Tattered Cover’s Colfax Avenue store, some time next week. With a camera. Pictures of the book on the shelf will be posted online. There will be rejoicing.

And talking of pictures, I’m giving serious thought to adding a Readers’ Gallery to this blog, rather like the one Craig Hallam set up on his blog. Have you read Mr. Gunn & Dr. Bohemia? If so, and you’re up for sending me a selfie, use the Contact form (the link’s at the top of this page) to let me know. If there’s enough interest, I’ll set that up and get back to you.

Now, a parting note on the subject of the title of this post. Storytime is an apt title for an author’s blog post—but in this case it also has a special meaning, in that it’s the name of a song by Finnish symphonic rock band Nightwish. The song is on YouTube, and it’s really rock-yer-socks-off stuff. I’ve been listening to more of their songs while working, and I’m most impressed.

And on that musical note, I’m off to do a little more work on the timeline. Until next time, gentle reader . . .

Gentle readers, I did an interview! J. Aurel Guay asked me a bunch of questions about my past, present, and future writing. Enjoy! The page is here.

Consignments – or, Getting Your Book On Shelves

A tip for writers: you’ve seen those shelves in your local bookshops that say Local Author (or something similar). Wouldn’t it be cool to see print copies of your works there? Of course it would. Here’s how:

How do I know all this? Because I just went through the process myself. I have three indie bookshops in my area, and all offer several consignment deals. One was far too expensive—five times the price, for much the same package that the other two offer. Those other two, though, have just what I was looking for: for a small fee, I get print copies on a prominent shelf, and a mention in the shop’s newsletter. As I write this, Old Firehouse Books in Fort Collins has copies of Mr. Gunn & Dr. Bohemia on the shelf, in the public eye. And if all goes well, another indie bookshop in Denver will have copies available in a couple of weeks (more details on that when it happens).

So, if your book is out there, and you have a box of print copies, what better way to get the word out than have them on display in a bookshop?