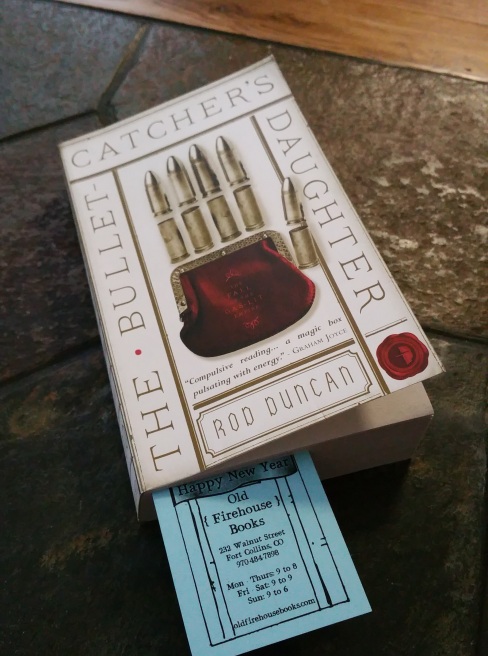 THE short: A damned good book. Most definitely five stars, and a must-read for fans of steampunk and alternate history.

THE long: I was in the bookshop looking for gifts. I happened along the SF/F aisle, where I saw Unseemly Science by Rod Duncan. It caught my eye because it was face-out on the shelf rather than edge-out and so I saw the cover, and was intrigued.

They say not to judge a book by its cover. What a crock that is. You can’t HELP but be fascinated by a good cover. I’ve lost count of the number of books I’ve bought for no other reason than they had bloody good cover art. The Chronicles of Thomas Covenant, for example, and John Varley’s Titan, Wizard, and Demon (aka The Gaian Trilogy).

But I digress. I saw this book. I was interested—but I didn’t buy it, because I was looking for gifts for other people, not for me.

Then my wife said I should have picked out something nice for myself, too. So I went back and grabbed it and gave it to her. And then, Christmas evening, I unwrapped this package, and there was Unseemly Science.

I opened it eagerly . . . and found that it was the second book in a series. Shit. I really wanted to read it. But I didn’t want to read it until I’d read the first book.

Long story shortened: Next day, went back the bookshop. Bought The Bullet-Catcher’s Daughter (the first book in the series). Went home. Started reading. Today (that is, the day after starting it), finished it.

And DAMN it’s a good read. The only reason I didn’t read it in a single day was that I was busy the first evening and had to put it down.

So, the gist. Elizabeth Barnabus lives a double life—her alternate persona being that of her fictional brother, a private investigator. Why the double identity? I think I can say without it being a spoiler, because it’s revealed in the first couple of pages anyway. You see, Elizabeth lives in an alternate Britain in which women aren’t permitted to own property or manage businesses, so to be able to work as an investigator she needs to be able to disguise herself as a man. (That’s a simplification; Duncan has built an intricate world in which Britain is cut in two, the north and the south being very different places. But I can’t say much more on that without introducing spoilers, so I’ll leave it there.)

As to the story itself . . . Elizabeth is commissioned to find the missing brother of a duchess. Along his trail she finds murder and betrayal, is chased by the dreaded Patent Office, and even joins a circus. No-one is who they seem. The story twists and turns like a maze of alleys on a foggy London night. And the atmosphere of the story is to match—the settings are dark, dank, almost Victorian. (Is it Victorian? There are a good number of clues that say not—but I don’t want to give anything away.) It would make an excellent movie, I might add. I couldn’t put it down; I’ve been stretched out on the sofa most of the day, reading. A very satisfying read, indeed.

Is it steampunk? I’d say so. There are purists out there who might disagree—but at the end of the day, purist definitions are meaningless. If the readers say it’s steampunk, then it’s steampunk. (I mention this because I’ve read comments from some people saying that Cherie Priest’s Boneshaker and its sequels aren’t steampunk because they’re set in America and not England. I say they’re wrong. Purists can go way too far sometimes.)

So now I’ve finished The Bullet-Catcher’s Daughter, I’ll be starting into Unseemly Science just as soon as I can (i.e. later this evening). Note that the third book in the series, The Custodian of Marvels, will be on bookshelves on February 2. I for one am going to be having a hard time waiting for it.