YOU’VE self-edited your script, and now it’s much better than that first draft you had before. Is it perfect? Probably not. You could do another editing pass and I’ll bet you’ll still find something wrong. Lots of somethings, in fact. But there comes a point where you can honestly say to yourself that your typescript is something you’re happy for someone else to read. Are you ready to get it published?

How do you get it published? 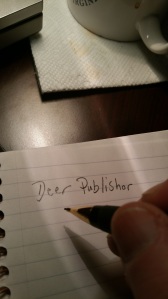 There are a number of options:

This is IMPORTANT: No reputable agent or publisher should ever, ever, EVER ask you for money up front to “cover costs” or for anything else. Real publishers and agents take their percentage from sales of the book AFTER it’s been published. If an agent or publisher charges for their services up front, they’re almost certainly scam artists intent on taking your money. Take a look at the Writer Beware site for more on this.

Here’s another thing: Be ready for rejection. In fact, expect rejection—that way it won’t faze you when it happens. And it will happen, over and over and over. At a rough estimate based on what I’ve seen, the chances of any one agent accepting your work is something like five percent. Indie publishers appear to have higher acceptance rates, but it’s hard to be certain about that because good data is hard to find. The thing is, agents and publishers are taking a risk when they accept your work. They have to cover the costs of doing their job until your book is on the shelves and making sales—in the case of agents, time spent dealing with publishers, and in the case of publishers, paying editors and artists and everyone else involved in getting your book out there. Maybe you’ll sell hundreds of thousands of copies and you’ll all be rolling in cash. Or not. It’s a gamble, and it’s on their dime, which is why agents and publishers are so picky about what they accept.

Now let’s say your work is accepted. What next?

AFTER you’ve celebrated a little bit (because getting accepted IS a big deal and worthy of a little celebration), be ready for what can be the hardest part of this whole thing. Remember all that self-editing you did? Well, now it’s about to happen again. Only this time, someone else—maybe your agent, maybe a copy editor working for a publisher—will be picking your book apart and finding things you didn’t even suspect weren’t right. They’ll be coming back at you with lists of things that need changing. (They should not be making those changes themselves, beyond maybe correcting simple, obvious stuff like spelling errors; they should just be telling you this passage or that scene needs fixing, and they might suggest ideas for how to fix it. But it’s your book, and how you fix it is up to you.) And you might very well find yourself working to a deadline.

Here’s a story for you; at the time Mr. Gunn & Dr. Bohemia was accepted, I had no idea that I was about to spend the next SEVEN MONTHS editing the typescript for publication. Seven months of working on it evenings after work, and hour upon hour at weekends. It was tough, and not just on me—I swear my wife had plans to throw my laptop out into the yard and then set it on fire. (This is why so many books have an “acknowledgements” page where the author thanks their spouse for putting up with it all for so long. Until you’ve been through it, and put your other half through it, you have no idea just how much mutual understanding is needed for this.) But seeing the book out where people could buy it made it all worth it.

And guess what? Once you’ve been through it once, the lessons you learn will make the next one go that much easier.

That, I think, concludes this short series of posts (unless I think of something else to add). I hope, gentle reader, that this helps in some small way.