YOU have your story idea. Now what?

To paraphrase Stephen Koch in his excellent book, Modern Library Writer’s Workshop: A Guide to the Craft of Fiction:

Ok, if it was that much of a paradox, writing any story would be impossible. Here’s what I do:

I write the whole story out in a single paragraph. At this point in the story’s development, that’s all I can really do. I don’t have enough detail to go any deeper just yet. That’s the point; I start with the ten thousand foot view, and get more detailed as I descend to ground level. 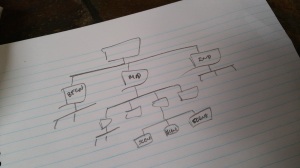 So now I descend, as it were. I write the story again, in three paragraphs:

Note the order. The beginning part is the setup, where I establish my characters (at least, in a very vague form at this point; I haven’t assigned names, ages, genders, etc.). The end is where I want them to be at the end of their journey. I can’t figure out the middle part until I have an idea of where the story ends.

The middle part is the story, in many respects. I know where my characters begin their journey, and I have a pretty good idea where they’re going to finish up. Now I can tie a rope between those pins, and figure out how it goes from one end to the other. That rope’s going to go up and down and maybe round in circles a little bit, in the sense that the characters are going to have problems and conflicts and hurdles to deal with, and while they might be forced off their trail by those obstacles, overall they’ll be moving toward the end. But they must, must, MUST! have those twists and turns. There must be things getting in the way, all the time. A story without conflict is a boring story. (George must kill the dragon. He drives his 4WD to the dragon’s lair. The dragon’s asleep. George walks up to it and shoots it with his revolver. The end. You see? Boring.)

The beginning and end don’t really need much else just yet. It’s the middle part that needs 99% of the work.

And while I’m doing that, I’m getting a better idea of my characters. For me, at least, this is an almost automatic consequence of developing the storyline. Story is characters. Characters are story. You can’t have one without the other. And I find that the more detailed I get with the story, the better I get to know my characters.

I begin to work out back stories for the characters. Not that all of that back story will find its way into the final typescript, but if I know that Jenny, say, has an aversion to rabbits because one bit her when she was a kid, it then makes sense when I write a scene in which she freaks at the sight of her friend Alice’s pet fluffy bunny. The thing is, back stories can help you greatly in figuring out your characters’ motivations, and those are important because they are in themselves a source of conflict between the characters themselves.

When do I stop with all the detail? There comes a point where I can say that each paragraph represents a single, self-contained scene. There’s no point going any deeper once I’m there. That typically takes four, maybe five iterations starting from my original one-paragraph story.

How many scenes should there be? That depends. I find that when I come to write the scenes later (I’m not to that point yet), each scene ends up being anything from about two hundred words to about two thousand, with an average length of about seven hundred and fifty (but that’s down to my personal writing style—your mileage may vary). For me, that means that a final scene count of around a hundred and thirty-ish will equate to a novel of around one hundred thousand words. Fifty scenes or less, and I’m looking at something that would be barely novel-length (it’s pretty standard that forty thousand words is the minimum for a novel, and less than that is a novella, maybe). If I’m working on a short story, I might aim for twenty scenes or so, depending.

But the real answer to the question is, the right number of scenes is whatever the story demands. However many it takes to tell the story, from beginning to end.

So by the time I’ve finished this process I have a bunch of scenes that tell a story. Am I ready to start writing yet? Not quite. There are a few more steps to take care of before I get to that point, and I’ll be getting to those in upcoming posts.