I thought I was being so clever, having an Android tablet. After all, why buy a Nook AND and a Kindle, when you can buy one device and download the Nook and Kindle apps (and Kobo, and Diesel, and a bunch of others) for free? 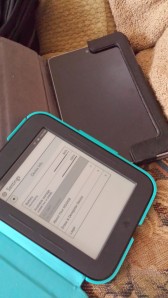 Well, in hindsight it really wasn’t that great an idea. Your mileage may vary on this, but for me it turned out that every time I felt like reading (to be more accurate, whenever I got time to read, which hasn’t been that often recently), I would pick up the tablet only to find that the battery was flat. Even just sitting there not being used, the battery only lasts a couple of days—and actually using it to read, you get a few hours at most before having to plug in the charger. Hardly what you’d call convenient.

And so a couple of weeks ago I went down to the basement and dusted off my Nook Simple Touch. It had been sitting there for months, and yet still had enough charge in the battery to be able to use it. It’s back in daily use, and I’d forgotten just how great it is to be able to read every day and not have to worry about charging it more often than once a fortnight.

In any case, how many different e-readers accounts do I really need? I have Nook and Kindle accounts; I also set up a Kobo account, but I never used it. At this moment I don’t need more. So right now I have the Nook, and I have the tablet I can use for Kindle books (unfortunately there are quite a few books available for Nook that you can’t get for Kindle, and vice-versa, hence the need for both). And the tablet’s battery is dead again, so I can’t read Kindle books until the tablet’s charged, which takes a couple of hours.

So, the question: should I buy a Kindle to solve that problem? I see the basic model is down to about $70, which isn’t bad at all. So I’ll definitely be giving that some thought.

Some status on the various projects:

Enough for now. Time to settle down for some telly, I think. Until next time . . .