The Day That Became Steampunk

We just had the weirdest day.

We’d set off from home intending to visit Shambhala Mountain, a Buddhist place up near Red Feather Lakes. We never got that far. First, Google Maps gave us a route that was definitely not the most direct. Still, I followed the directions and we were at least heading the right general direction.

As we came to a tiny place called Masonville, Kate started to feel a bit queasy (she sometimes gets motion sickness in the car) so I pulled over so that we could take a break. We looked around this little outdoor museum kind of thing for a few minutes then decided to check out the general store across the street. There’s a picture of the place here. And inside we found a wonder. Right there in the middle of nowhere, Colorado, in a place that looks like it has a two-digit population and that doesn’t even have mobile phone service, the general store sells STEAMPUNK STUFF. Well, not just that; they also have Victorian period style replica clothes and a bunch of other things – but hell, Steampunk things in such an out-of-the-way place? 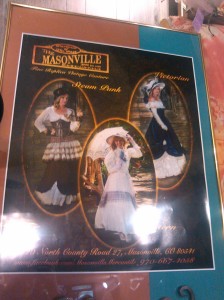 Clothes. Jewellery. Hats. Goggles. Monocles. Even bridal wear. The place is way bigger inside than you’d guess from a look at the front. 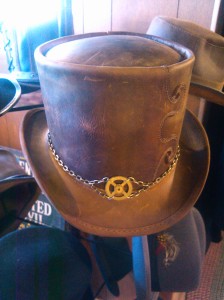 (This hat here? I’m ordering one in my size.)

So I took some pictures – which I couldn’t tweet because of aforementioned lack of phone service – and I bought some stuff. (I’m only sorry now that I didn’t take more pics. However we’re planning on going back and I’ll make a point of taking a bunch more.)

And the lady that runs the place mentioned that quite a few people go there for this stuff, and asked us whether we were planning to go to the Steampunk Convention in Denver that we’d never heard of and is happening in just a few weeks. (I did a search and the only thing I can see for about the right date is MileHiCon; if anyone reading this has better information I’d like to hear it.)

So it’s all very strange in hindsight. If Google had given me the most direct route, or if Kate hadn’t started feeling odd when she did, or if we hadn’t decided to go and take a look in the store, we might never have known about this place. Weird.